The Hammond organ, an instrument as unpredictable as they come | RED
Skip to content

The Hammond organ, an instrument as unpredictable as they come

You have to be the adventurous type to play something like a Hammond organ. 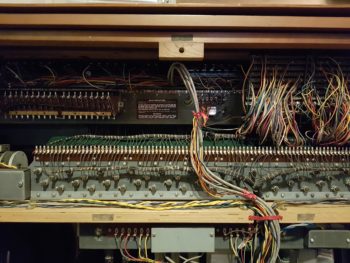 I’ve been playing piano since I was nine years old. A piano gets out of tune every now and then, and the wear and tear shows very slowly on the instrument. A Hammond organ can, and sometimes will, break down any moment you don’t want it to. I’ve found out the hard way, on several occasions.

The roughest way I found out about the A100’s wicked ways, was on a party at my place for no special occasion. Parties that just come up amongst friends are my favourite ones. We’d cook, eat, drink and play in no particular order. My music room is small, but you can fit two trumpeters, a guitarist, a pianist, a drummer who only plays brushes on a snare, and me behind the organ.

Something must have short circuited and I’m just happy that nothing caught fire!

So we’re playing our fourth or fifth tune and suddenly there’s a thundering noise coming out of the Leslie speaker. The band stops and I’m thinking: “What the hell is this?” I turn off the organ and then turn it back on a few minutes later. Slowly the thundering noise comes back, which isn’t promising any good so I turn it off, only to turn it back on the next day. What happens then is alarming: there’s no sound, but a minute later there this soft crackling and the smell of something burning. I look inside and the interior of the power supply is boiling. Something must have short circuited and I’m just happy that nothing caught fire!

But that was just on a party at home. It gets really annoying when your beloved Hammond organ starts acting up at your gigs. That power supply has been replaced, but the true weak spot of my A100 are the tubes and their sockets. Those parts can get messy, which results in loud pops during playing and one night it became so obnoxious that we had to stop playing! Thank God it happened during our last song.

Lesson learned: always bring contact spray to your gig when playing something as quirky as a Hammond organ!

The alternative is my new, much easier to handle, digital organ from Italian manufacturer Viscount. It’s light, sounds convincing, plays well, has all the buttons in the right place, is much more reliable than my A100 and… is not the real deal. The real deal surrounds you with sound, instead of firing the sound at you. The real deal moans and groans, it mixes with the band, it spits fire when you pull out all those drawbars. It doesn’t always work properly, but oooh, when it works… I guess you just have to take the bad with the good.