Just what The Doctor ordered is one of my tunes on AHOOO!, our forthcoming CD. And in the land of Hammond organists, there’s only one Doctor: Dr. Lonnie Smith, a.k.a. The Turbanator. 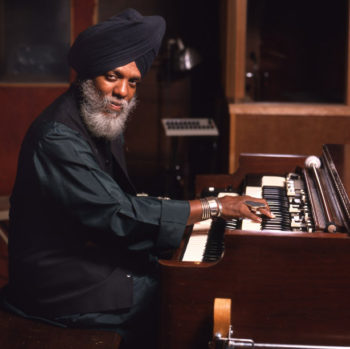 The first time I saw him in action was at the North Sea Jazz Festival, when it was still being held in The Hague, I was going from being totally amazed to getting very silly with my friends, because one moment he layed down a slamming blues, while seconds later he started to play Chopsticks. Now that was crrrazy!

Years later I got a phone call from Hilde Slinger, artistic manager of the Jazz Orchestra of the Concertgebouw and still working incredibly hard for the jazz scene in The Hague and Holland. If The Doctor could use my Nord Stage for a rehearsal? But of course! As long as I could come along, witness the rehearsal and have a chat with Dr. Smith, why not?
In the break Lonnie told me he actually hates Nords, because of their tinny sound. “I understand why people use them. They’re practical. But it ain’t the real deal!” I couldn’t agree more, especially when I heard him a few days later at Tivoli/Vredenburg in Utrecht on a B3 with Leslie. That roaring Hammond sound! It’s just impossible to get that out of a keyboard with a PA speaker.

And then suddenly there it was. On Marktplaats, the Dutch equivalent of eBay: a completely refurbished Hammond A100 with a Leslie 145, looking brand spanking new. When I went to the seller to test it, I was hooked immediately. So without further ado I bought the combination, together with two trolleys and some thick covers for usage when moving the stuff to gigs.

On one of my visits to Pavlov, the jazz club not far from my house, I suddenly bumped into Hilde. And guess who was standing next to her? The Turbanator! Of course we had another chat and then I asked him if he remembered that rehearsal on my Nord. He did, and then I told him that I finally went for a real Hammond organ. His reaction was clear and unforgettable: “So now your’e a real man!”

Now I reign from the Hammond organ, I can only say that The Doctor is one hundred percent right.